Program for the fiesta 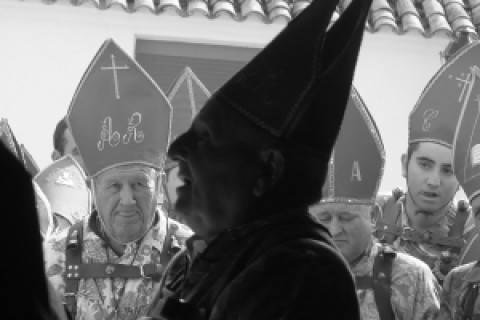 Both Almonacid's current inhabitants and all its descendants, those who emigrated seeking a better future and offspring, have an unavoidable appointment with their roots, their identity and their deepest sense of belonging to a small community come the start of February every year. These days, the population of this small town multiplies, even more so than during the summer period, and many of Almonacid's son's & daughter's feel their roots cry out to them in congregation around a festivity which reminds them that, even from a distance, they still belong to this small plot of land and its atavistic traditions.

Every year, to our days, the ceremonies which take place throughout these festivities follow a similar pattern in which religious acts, such as the procession and mass, take place alongside tours around the town's streets with proverbs and wranglings, and so forth. These are very intense days for their genuine protagonists, diablos and danzantas. On the 2nd and 3rd of February, the performances take place from dawn until dusk. This entails an extraordinary effort, as this profound personal sacrifice is assumed naturally by the diablos and danzantas

The most emotional and remarkable moments are those lived during the processions in honour of the patron saints, the heartfelt proverbs of the danzantas, the ritual washing of San Blas and the dances inside the parish church, which hardly holds the swarm of visitors surging on these days. 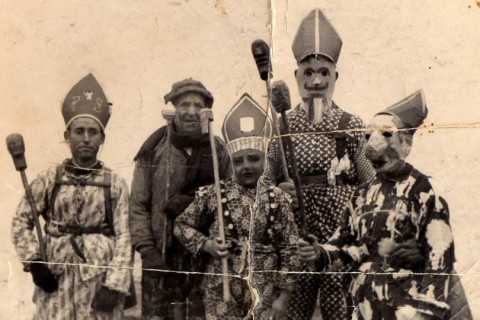 8:00 p.m. The celebration begins the day of San Ignacio, when "diablos" gather in the home of the "diablo mayor"  and steered sounding their bells towards the House of the Mayor, accompanied by the danzantas and the people. Once there, the "diablo mayor" asks permission to the authority to be able to start the party. Attendees to the event can enjoy "rosquillos", "rosquillas", muffins, "zurrra" and aniseed, offered by the Mayor. After agape, "diablos" head to the porch of the parish church, where praying for the souls of all the deceased brothers. Then begin your journey throughout the village, giving rise to the unmistakable sound that all the people will accompany during the following days. Finally, they say goodbye until the next morning.. 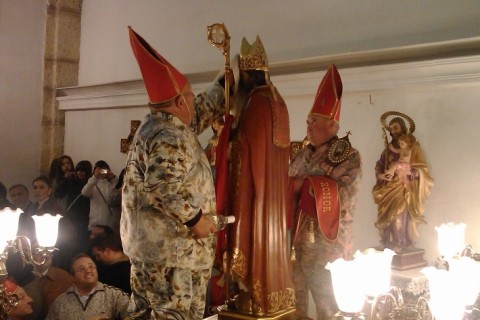 8:00 a.m. Early morning, the ‚Äúdiablos‚Äù get together at ‚Äúdiablo mayor‚Äù house, and starts the turns around the village. At the first time, they go to ‚ÄúMadrina Mayor de la Virgen Candelaria¬¥s‚Äù house to collect the marzipan cake of the Virgin, which is going to be raffled after the fiesta. While ‚Äúdiablos‚Äù are walking around the village, another group of them is showing the Virgin cake to all the population and collecting sweetmeats from all houses for the brotherhood.

12:00 a.m. The procession start, one of the most important moments of the day. A Virgin brotherhood pennant leads the procession followed by the ‚Äúdiablos‚Äù, who dance and jump very hard in front of Candelaria. After the virgin image are the authorities, priests and finally, the ‚Äúdanzantas‚Äù, they don¬¥t stop dancing and exclaim declarations for the Virgin while the flageolet and drum are playing.

After procession, mass is celebrated, and then, the ‚Äúdiablos‚Äù back to the church, but now are the ‚Äúdanzantas‚Äù who takes center stage. The ‚Äúdichos‚Äù, exclaims poems about praises, requests and memories of personal or shared experiences, many of them with a touch of humor. This is one of the most exciting moments in the fiesta.

At the end of the last ‚Äúdicho‚Äù, ‚Äúdiablo¬¥s‚Äù cowbells stun the church, and them wont stop until ‚Äúdiablo mayor‚Äù lift his arm with the ‚Äúporra‚Äù (a baton with a monster wooden head) ordering the end of dance. Then ‚Äúdiablos‚Äù goes to their homes to have lunch and rest.

5:00 p.m. ‚ÄúLavado de cara‚Äù , which roughly translates as face washed of San Blas, where ‚Äúdiablos‚Äù wear a pointed hat called ‚Äúmitra‚Äù, goes to the cemetery to remember deceased brotherhood members. Then, after walk a turn around the village, they go to the church carrying a candle. In the church, ‚Äúdiablo mayor‚Äù wash San Blas face with hard liquor and a cloth to remember the legend. He decorate the image with pious people¬¥s things to thank him, his Saint protection. While, the cowbells noise don¬¥t stop until ‚Äúdiablo mayor‚Äù exclaims some formal declarations.

8:00 p.m. The ‚Äúdiablos‚Äù walk around the village the last turn of the day, which ends in the principal square. 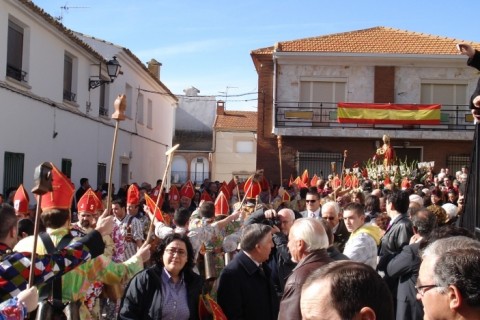 8:00 a.m. The day starts like yesterday, the ‚Äúdiablos‚Äù get together at ‚Äúdiablo mayor‚Äù house, and walk around the village. This is the first turn of the day, when some of them knock all the population doors to collect money for brotherhood rates. It will finish after the procession.

12:00 a.m. Start the San Blas procession, same order, same passion, same dances and same noise than the previous day, but ‚Äúdiablos‚Äù change the Candelaria floral bonnet for the ‚Äúmitra‚Äù which translates is miter or pointed hat. We can find another difference at the greater public affluence of visitors from other villages, provinces and from other countries.

Like yesterday, mass finish with the ‚Äúdiablos‚Äù dances at the church, the danzantas ‚Äúdichos‚Äù and finally, the last dances for San Blas. Is in these moments when ‚Äúdiablos‚Äù try harder to make more noise, jump higher and dance as long as possible because they know this is their last chance until next year.

5:00 p.m. ‚ÄúDiablos‚Äù back to walk around the village in a new turn which is finished at the principal square.

8:00 p.m. The last turn before Farewell. ‚ÄúDiablos‚Äù and many people walk around the village. They all want to enjoy the last fiesta moments and when they arrive to the square, ‚Äúdiablos‚Äù enclose  their boss and dance. He tries to stop them with his ‚Äúporra‚Äù movement, and when he get it, ‚Äúdiablo mayor‚Äù shouts: ‚ÄúViva San Blas!, viva la Candelaria!, vivan las autoridades! (the authorities), viva el cura p√°rroco! (the priest), vivan las danzantas!, vivan los forasteros! (foreign, strangers, visitors), viva el acompa√±amiento! (accompaniment),  viva la endiablada!‚Äù. Every ‚Äúviva‚Äù is answered for ‚Äúdiablos‚Äù and finally ‚Äúdiablo mayor‚Äù says ‚ÄúHasta el a√±o que viene, si Dios quiere‚Äù (See you next year if God allows it). The noise of cowbells decrease gently, it wont sound again until next year. 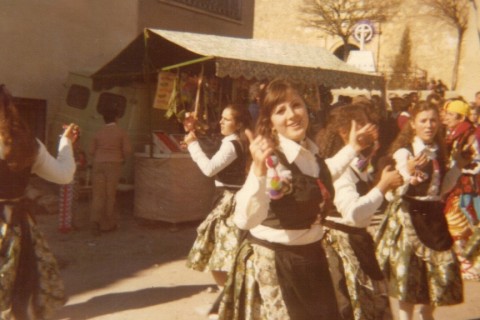 This is the last day of the fiesta, called "San Blasillo", there are no "diablos" and cowbells noise but, in the morning, "danzantas" jump and dance around the village with them "paloteos". They change castanets for wooden sticks and dance hitting them. The population of Almonacid ask for a "paloteo" and pay some money for it. There are different kind of this dance: ‚Äúel rat√≥n‚Äù (the mouse-, ‚Äúla marcha real‚Äù (royal song- or ‚Äúpepino gordo‚Äù (fat cucumber-, and everyone has its own choreography and music.

9:00 p.m. The ‚Äúdiablos‚Äù get together again to have dinner without them cowbells and vestment. They cook themselves fried sheep with garlic. Is time to remember these three great days. The diablos wil have lunch again on February 5 (grandson day- and on August 15.